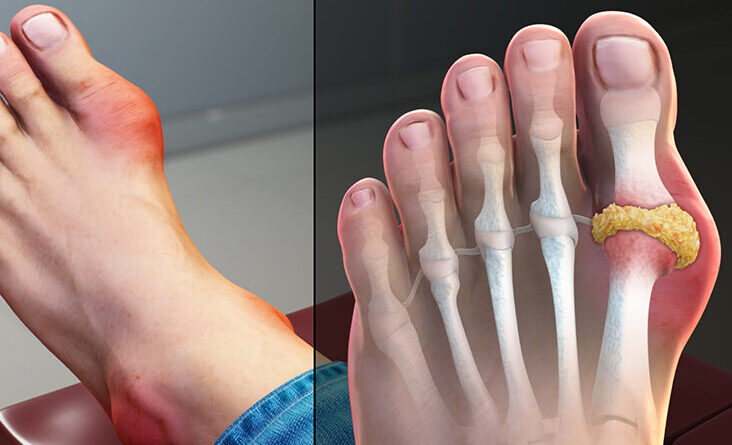 Gout is a common and complex form of arthritis that can affect anyone. It’s characterized by sudden, severe attacks of pain, swelling, redness and tenderness in the joints, often the joint at the base of the big toe.

An attack of gout can occur suddenly, often waking you up in the middle of the night with the sensation that your big toe is on fire. The affected joint is hot, swollen and so tender that even the weight of the sheet on it may seem intolerable.

Gout symptoms may come and go, but there are ways to manage symptoms and prevent flares.

The signs and symptoms of gout almost always occur suddenly, and often at night. They include:

Gout occurs when urate crystals accumulate in your joint, causing the inflammation and intense pain of a gout attack. Urate crystals can form when you have high levels of uric acid in your blood.

Your body produces uric acid when it breaks down purines — substances that are found naturally in your body.

Purines are also found in certain foods, such as steak, organ meats and seafood. Other foods also promote higher levels of uric acid, such as alcoholic beverages, especially beer, and drinks sweetened with fruit sugar (fructose).

Normally, uric acid dissolves in your blood and passes through your kidneys into your urine. But sometimes either your body produces too much uric acid or your kidneys excrete too little uric acid. When this happens, uric acid can build up, forming sharp, needlelike urate crystals in a joint or surrounding tissue that cause pain, inflammation and swelling.

You’re more likely to develop gout if you have high levels of uric acid in your body. Factors that increase the uric acid level in your body include:

Your doctor may prescribe a higher dose to stop an acute attack, followed by a lower daily dose to prevent future attacks.

After an acute gout attack resolves, your doctor may prescribe a low daily dose of colchicine to prevent future attacks.

Corticosteroids are generally used only in people with gout who can’t take either NSAIDs or colchicine. Side effects of corticosteroids may include mood changes, increased blood sugar levels and elevated blood pressure.