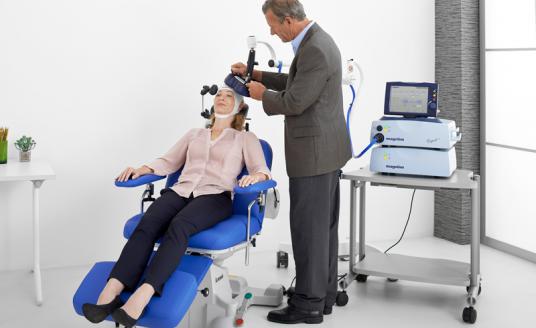 Did the operating system happen in your brain?
Now a brain-mimicking technology to help it boost cells TMS device is made of one or two copper coils, positioned on an external, targeted area of a patient’s scalp, which produces brief, magnetic pulses to an estimated depth of approximately 2 to 2.5 centimeters. The magnetic field triggers changes in neuronal activity and communication, which can alter unwanted activity within the brain.

TMS can work as a stimulant or an inhibitor of cerebral activity, or both. In addition, different sized coils and varying magnetic impulses can impact outcomes, depending on a patient’s neuroplasticity—the capacity for neurons and the nerve cells to change and compensate for injury and disease.

TMS short-term effects are due to changes in neuronal excitability caused by shifts in ionic balance of active neurons. Longer-lasting effects of TMS appear to depend on synaptic changes among cortical neurons, also known as long-term depression and long-term potentiation.

Most importantly, TMS is well-tolerated by most patients with few side effects.

When is TMS used?

TMS it is one of the latest therapeutic methods for the treatment of various diseases and neuropsychiatric disorders, among which are:

How long is an TMS procedure?

TMS therapy involves a series of treatment sessions. Treatment sessions vary in length depending on the TMS coil used and the number of pulses delivered but typically last around 30 – 40 minutes. Patients receive TMS 5 days a week. A typical course of TMS is 4 to 6 weeks. However, this can vary depending on an individual’s response to treatment.

Do I need to be hospitalized for a course of TMS?

Unlike electroconvulsive therapy (ECT), TMS does not require any sedation or general anesthesia, so patients are fully awake and aware during the treatment. There is no “recovery time”, so patients can drive home afterwards and return to their usual activities.

What are the side-effects of TMS?

TMS is well-tolerated and associated with few side-effects and only a small percentage of patients discontinue treatment because of these. The most common side-effect, which is reported in about half of patients treated with TMS, is headaches. These are mild and generally diminish over the course of the treatment.  Over-the-counter pain medication can be used to treat these headaches.

About one third of patients may experience painful scalp sensations or facial twitching with TMS pulses. These too tend to diminish over the course of treatment although adjustments can be made immediately in coil positioning and stimulation settings to reduce discomfort.

TMS has not been associated with many of the side-effects caused by antidepressant medications, such as gastrointestinal upset, dry mouth, sexual dysfunction, weight gain, or sedation.

The most serious risk of TMS is seizures. However, the risk of a seizure is exceedingly low, One in 1,000 patients experience a provoked seizure; while this risk is similar to that from some antidepressant medications (e.g. bupropion) seizures related to TMS exposure have terminated soon after the magnetic stimulation ends.

Who cannot get TMS therapy?

Patients with any type of non-removable metal in their heads (with the exception of braces or dental fillings), should not receive TMS. Failure to follow this rule could cause the object to heat up, move, or malfunction, and result in serious injury or death. The following is a list of metal implants that can prevent a patient from receiving TMS: